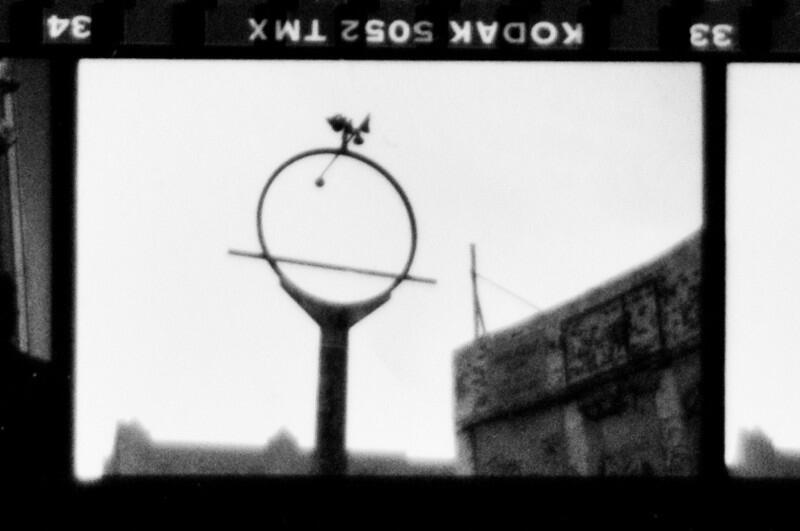 The Philosophy of Interference and the Persistence of Vision

“Hey man, well this is Babylon.”

An old and dilapidated gas station, somewhere. The empty metal skeleton of the station’s sign stands outside like a sentry. There are no markings on the building save for the layers of graffiti that have accumulated through the years since its abandonment. The entrance is by no means clear, which is probably as it should be.

There is always too much wind, the river insisting on making its presence known even on dry land by interfering with the movement of the air. The whole place lives on an interfering movement, as if the manner in which things interact is always an imposing one.

A convergence of sorts, but uneasy.

And everyone somehow thinks the place is theirs, but at the same time feels a disconnect. As if they know they belong to the interference, to the imposition of all things here, but won’t admit to that truth.

So how does he fit in? A slight figure with a mean cold and an empty pack of cigarettes.

Clutter. Bits and pieces, again, interfering with the smooth lines of the world. Coffee endlessly filling his cup, smoke rising from the shrinking cigarette tilted in the ashtray, almost solid in the slanting rays of sunlight reaching all the way from the front windows to his table half-hidden in the back corner.

From this table, he can lord over the impositions.

Is it the clutter that makes this place feel as if it is haunted? Or does it merely seem to draw out the interference of the people themselves, focus it almost into a coherence that can be felt like a presence?

He scrawls in his notebook a line he heard somewhere. “Maybe I need romance to keep me warm, maybe I just need an electric fan heater.” The abandoned cigarette goes out in the ashtray. He lights another one and places it beside the first. There is a psychotic jazz playing on the tapedeck, but some sort of radio traffic keeps intruding, like someone nearby has something to say that is more important, or maybe what’s important is that someone hears it.

Someone is asking if she has been acting crazy, but the background is filling so much crooked space these days that everything just blends together. It’s impossible to tell for certain.

The clutter here is not stationary, not fixed in place or time. It all shifts so much that it seems not even to be quite the same clutter from one day to the next. Only the coffee remains constant.

There are days when a bell rings in the evening, and a fog snakes through the streets as if it weren’t enough for the river to invisibly stir the air. It has to cloud people’s vision as well. The bell, like the fog, seems to come from every direction at once, steadily calling out. A beckoning to something unclear but somehow not unexpected.

Even the people here are cluttered.

A new couple. Sitting in the direct sunlight, each with a bird on their shoulder. Somewhere, scattered amidst the clutter here, there are birds. Paintings or ceramics of them. Now there are two live birds chattering away in the corner, the woman bending down now and again to kiss hers on the top of its head. Some man with his little red-haired girl in his arms approaches their table, asking if she sees the birds, sees the birds. The girl lets out a whelp of joy. The birds don’t do much of anything. The father takes his daughter back to their own table, the girl waving towards herself as children do when they are too young to have developed the motor skills to turn their hands around properly, trying to say goodbye to the birds. Bye birds, bye birds.

Some man talks of circumstances at his own restaurant. He sees couples come in with their children, no older than ten years old, and order food for themselves but none for their kids, merely tossing them a rib now and again. They have the money to order themselves drinks that cost six dollars, he says. But not a three dollar meal for their kids. And the kids will grow up weak and stupid and end up worse than their parents.

The girl he sits with gives him a Tarot card reading, across the cloth on the tabletop. He watches more or less silently as she goes through each card in turn after laying them out, as each card in turn reveals yet another aspect of his current states. Things he wanted. Goals of relationships, love, and sex. Detachment and playing a social role that was more and more fakery every day. He watches silently, but inside grows only more uncomfortable and uncertain about having the things he wanted.

Where has the time gone?

Weeks have slipped away, perhaps with the retreating fog back to the river that is not a river. Places he thought he was to find himself in for some time to come are now merely sites for visiting. Things that had been growing to seem more certain, more sure, are disappearing into a hazy after-image of possibility.

There was a time not so long ago when he would lie in bed at night, at the precipice of sleep, feeling the absence of anyone beside him as if that absence were a presence. A contradiction, an irrationality. But a truth nonetheless.

Now he feels something even more irrationally profound. That as he stands upon that edge before the world seems to spin into darkness and the morning comes as if in a moment, there is no one in the whole of the world thinking of him. No one at the verge of sleep in an empty bed wondering where he was, and wishing he were there.

Somehow the summer has arrived, and the air has found its physicality in the form of a sticky dampness instead of a sprawling mist. Breathing seems to become a form of oppression.

Of course there is also the sudden and almost unrelenting matter of the girl. Disarming and shifting what ground he has left beneath him in ways best avoided. If it had still been spring, he could easily have dismissed it as the ruttish interference of that season.

But it was summer now.

Someone has replaced the psychotic jazz with a droning sing-song of a single word over and over endlessly that’s meant to have some sense of spiritual significance. The word, someone once told him, roughly translates as “there is only love”. But its endless repetition only conjures the daydream of a mad shooting spree through downtown streets, screaming “there is only love!” as victim after victim falls to the blast of a shotgun.

There is a knot in the deepest part of him, Gordian in every conceivable sense. He doesn’t have even meaningless words to define it, let alone tell the secret of its undoing.

How do you excise the firmest and most irrevocable emotions without gutting that which feels them?

There is a picture in his head, a memory of many moments all nearly the same. He describes it to friends and asks them to guess its name. In the picture, he awakens in the middle of the night. As the dim grey shades of the room around him come into blurry awareness, he can feel the girl resting in sleep beside him, her breathing the only sound in the room besides that of his own breath. He feels the slight pressure of something against his leg; her cat, curled up inside the bend of his knee, shifting slightly at the disturbance.

This is a picture of home. No one ever seems to guess correctly, or fathom its importance. Then again, it’s possible the existence of this picture is little more than an inconvenience to them.

He is haunted by a choice. Not his, and quite potentially not even one that ever actually occurred, but rather a very particular and deliberate delusion constructed to preserve his sanity.

He spent a year preserving his balance with a simple and utter lie: That one day, she would return to him. And now that she was no longer even here, in this place, these lessons of denial were serving him well. A brief trip away, perhaps a vacation. But by no means a final departure, whose reality nonetheless rose up to manifest itself in rather mundane and uninspiring ways. Loss of appetite. An enjoyment of cleaning.

And because it wasn’t true, he had no reason to cry as she drove away.

Throughout this day, he sought distractions, but not so deliberately that it meant admitting the reasons behind the seeking. He listened to the days of others, sinking into the cleansing movements of their stories. The clarity of sheer momentum, once he made the slightest effort to push off. A stillness of inertia.

The music cascades again, melting into a man singing Hosannahs to the bliss of not being able to feel a thing at all.

“But who is the dreamer?”

There is a gravity, a radiating that suffuses like vertigo but masquerades as just how things go, how you go. An intrinsic field. It was there then. It’s there now, and here, too, even as we lose track of the whens and wheres. No one notices, especially, in all the clutter. Or, perhaps it is the clutter.

That place is gone, its surrounding place itself unrecognizably changed, as if its sense of self had no more permanence than his own, even as he himself long since has moved on from both. Its clutter of things lost and forgotten even as that of people continues in same and new forms.

This never was his picture, never were his hauntings. The girl was someone else’s idea dressed up to seem to him like his own. We are drawn by gravity to picture this, dragged to be haunted by these. There never was so much clutter in the pieces and people around him as in this confusion of imbalancing pull, those undulating waves of radiation blinding and blaring their way past the whoever or whatever of him, obscuring himself from himself.

He smoked. Does he remember this, or just know it? Even this was artifice, a masking agent conforming to the clutter and concealing other, truer, but hidden things. He remembers, though, that he smoked because of the girl. Which? It's all the same. They are each of them all the same girl, all the same performance. They, too, were masks worn to meet the demands of gravity.

That present absence at the precipice never was what it pretended. His picture only ever needed exactly that empty space, notwithstanding what he knows now as mere pantomime to the contrary. That electric fan heater is all that’s called for, all he ever should have been calling for. What’s missing isn’t truly missing if you only were ever following everyone else in its desiring. The field is not, after all, intrinsic. It is made.

That empty space only ever was the absence of the dreamer we’ve dreamt up to dream us back, instead of doing the dreaming ourselves.